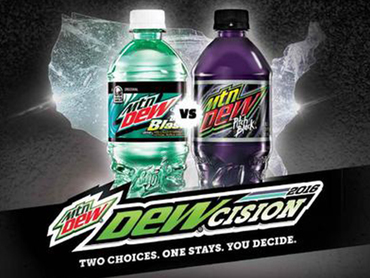 With all of America entrenched in the 2016 presidential election, the time is ripe to make a DEWcision. So MTN DEW is asking the loyal members of DEWNation: which of two legendary flavors – MTN DEW BAJA BLAST or MTN DEW PITCH BLACK – will earn its rightful place in the DEW retail lineup at the end of DEWcision?

Now through July 9, fans will be able to vote for their favorite flavor on DEWcision.com or Twitter by including one of the following hashtags in their tweets: #VoteBajaBlast or #VotePitchBlack. Every hashtag will count as one vote. Super delegates—or, fans—can complete additional challenges to rally for their favorite flavor. These challenges will be released every third week on the @MountainDew social channels, and count as multiplier votes. The flavor with the most votes at the end of the program wins a spot in the DEW retail lineup after summer is over.

A television commercial featuring the DEW racing team— Kasey Kahne, Chase Elliott and Dale Earnhardt Jr.— is helping “drive” the campaign. The commercial debuted live today as a FOX Sports exclusive, and features the three NASCAR superstars and Hendrick Motorsports teammates up to some electoral hijinks in their off-time. Kasey, representing team PITCH BLACK, and Chase, leading team BAJA BLAST, try to sway the vote of Dale Jr., who remains a neutral party, for their favorite flavor by completing the ultimate to-do list in his stead—from mowing his lawn to painting his fence. The commercial will air nationally on FOX during the April 24 NASCAR Sprint Cup Series race in Richmond, Virginia, where Kasey, Chase and Dale Jr. will kick off the campaign by racing three unique DEWcision paint schemes.

About the Candidates MTN DEW BAJA BLAST, a delicious blend of MTN DEW and tropical lime flavors, has been the fan-favorite DEW flavor at Taco Bell since 2004. It is the No.2 beverage requested and one of the best performing fountain drinks at Taco Bell. MTN DEW BAJA BLAST'S staunch competitor is MTN DEW PITCH BLACK, the bold flavor of DEW with a twist of citrus and dark fruit flavor, which was first released in October 2004 as a limited-edition Halloween flavor. It was resurrected in the summer of 2011 as part of the "Back by Popular DEWmand" program and, earlier this year, became exclusively available via fountain at Speedway stores nationwide for a limited time.