Cindy Crawford now has her own PepsiMoji 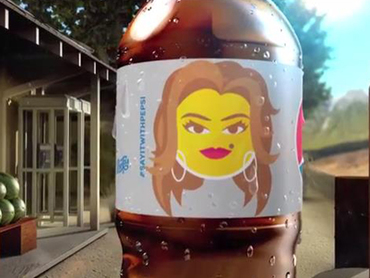 After 24 years since she appeared in the iconic Super Bowl television spot, supermodel Cindy Crawford has once again teamed up with Pepsi to recreate the famous 1992 commercial. However, this time she appears as an emoji, or as she says, an “eMOLEji.”

The 15-second debut of the ad features Crawford's cartoon face - with her famous beauty mark - on a Diet Pepsi bottle walking to a vending machine, similar to the renowned 90’s commercial.

Crawford had been thinking about creating her own emoji for a few years, and with Pepsi’s #SayItWithPepsi campaign she was able to. Her recent Tweet shows her excitement:

So honored to have my Diet @Pepsi commercial recreated with Pepsi Emojis, or should I say Pepsi eMOLEjis! #SayItWithPepsi

The commercial will air today, June 21, along with PepsiMoji characters that will appear on nearly half a billion specially-designed bottles of Pepsi, Diet Pepsi and Pepsi MAX. The new characters will be available to download for free on the Apple App and Google Play stores.