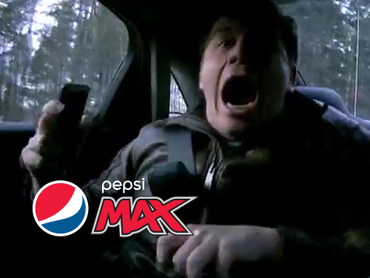 It might seem strange that Pepsi MAX based its second "Test Drive" prank video with Jeff Gordon around doubts some people had about the first one. But it turned out to be a creatively fruitful approach.

First, it was a way to draft off the success of the earlier megahit. It also gave the second video a strong narrative. (Gordon, again in disguise, takes one of the big doubters—Travis Okulski of auto blog Jalopnik—on a very real, hair-raising ride of his own.) And finally, in many ways it used Gordon's pride as an accelerator. This isn't a guy, after all, who would want you to think he couldn't do these stunts himself.

Following the release of "Test Drive 2" on Thursday morning, we spoke with Marc Gilbar, creative director at Omnicom's Davie Brown Entertainment/The Marketing Arm in Los Angeles, which concepted and handled creative execution on the new video. (Like the first one, this one was directed by Peter Atencio of Gifted Youth.)

Below, Gilbar tells us all about the production, from the genesis of the idea to the safety issues to the moment when Okulski almost kicks out the camera inside the taxi.

AdFreak: The first "Test Drive" video did so well. I suppose a sequel is a no-brainer.
Marc Gilbar: The first one was a huge hit. But as with any sequel, the difficulty is to do something fresh and original.

For every Godfather II, there's a Godfather III.
Exactly. It's tough. We did [Pepsi MAX's] Uncle Drew, and that's one where we just tried to expand the narrative and create a story people would like. But that's harder to do with "Test Drive," because of the character.

Pepsi, to their credit, wanted to address the haters. Haters is a general term, because I don't think that characterizes Travis, the guy we actually used. But the Internet audience is a conspiracy-driven audience that will literally break down every moment of your video. We always got a lot of amusement out of that, but we thought a lot of people could relate to it, too—and if we could incorporate or reference it in some way, it would be fun for people.

There happened to be this incredible article following the release of the first video. I had noticed it at the time. And when we got the brief and started thinking about it, we went back and looked at it, and realized how great Travis was and his whole breakdown of the first video—everything from the sound of a V8 engine versus a V6 to the cup holders on this model of Camaro. It was pretty funny. We thought he would make a great mark for the second one.

You weren't involved in the first video, though.
No, [TBWA\Chiat\Day] did the first one. Pepsi will give a jump ball on a lot of these projects. The "Zero-Calorie Cola in Disguise" came out of Uncle Drew and sort of expanded into the world of racing. Chiat did that first one, which was great and a huge success. The second one was more of a jump ball, and we had this particular idea.

It's interesting to focus on claims that last year's ad was faked. Is that just a hook to get people in—to draw off the success of the last one?
Yeah, I think it was a way to take a new angle. Anything else would have felt like you were doing the same thing over again. I think the honesty of it is what makes it great. With a lot of these pranks, if the setup is earned and done right, it makes the prank that much more enjoyable. If you just saw Jeff take a random person on a crazy cab ride, it may be funny, I guess, but the fact that this one had a specific purpose makes the drive that much more fun for the audience.

Shortly after the first one, I spoke to the director, Peter Atencio. He could only say so much. But it's not the point of the second video to really address whether the first one was real or not, correct?
I think that's right. What drove it, to a large degree, is that Jeff really wanted to show his stuff. He's a competitor. In the second one, there's no doubt that he's the guy behind the wheel. And obviously he's very capable of taking Travis on a crazy ride. Jeff was very involved early on. To get a Nascar driver to pull something like this off, there would be a lot of hurdles, I think. But the fact that he was so excited about it made it possible.

How do you get a guy like Travis to do this unwittingly without signing a disclaimer?
Part of the thing about Travis in particular is that he's such a big auto enthusiast. There was a lot of talking with his friends and his editors and the people around him just to feel out what kind of a guy he was. He's such a great sport. There's always risks involved. But he loves cars, he loves racing, he races cars. And his friends and editors also said he's excitable. He's a guy who gets excited.

Well, that turns out to be very true.
Right, it's perfect. There's a lot of unknowns with something like this. We had one shot at it, which was kind of nerve-wracking. But we felt good about the course and the safety of the course. We had designed it and tested it several times the day before, and with Jeff. We made sure it was super safe. And Travis just seemed like the kind of guy who could be taken for a ride, but also kind of enjoy the whole thing. At the end, he even wanted to go and do it again. He wanted to drive. He's a true gearhead.

There's one moment where he kicks the divider. Were you worried he was going to dislodge the camera?
There are so many moments in there where we got really lucky, in the way he reacts. That one was totally unexpected. I believe his foot even covers the lens at one point. We tested our cameras. They're pretty durable. And we built that whole divider and reinforced it. At the time we were just sitting back and watching what was happening. We saw the camera was still working, so that was good.

You only have one take to get it right.
That's right. And there's really no way to fake this kind of thing. Watching it afterward, we saw that his reactions were pretty big, so we were confident that we got what we needed. And then we had a consumer on set who had won a test drive with Jeff Gordon. So after he had finished the drive with Travis, we put the contest winner in the car, and this teenager got to go around the course once, which was fun.

Was Jalopnik wary of being part of an advertisement?
They were very intent on keeping their journalistic integrity. I think they saw the potential for a great story. They were obviously super collaborative and really fun to work with. But they wanted to keep that wall up and make sure Travis wasn't compensated in any way. If you read his article, it doesn't really talk about the product or the campaign—just the experience. And that was the story for them. They got a great story out of it—what it was like for him.

What it was like was terrifying.
I read the article this morning, and he really breaks it down, which is his style. Every thought in his head. Afterward we all had the same questions for him: What were you thinking? And he said in those moments, you're not thinking. He's been responding to commenters on Twitter, people saying, "You didn't see the cameras?" And he's like, "No, I was scared for my life!"

I'm sure you're hoping this second video will be just as big as the first.
You know, that's a big number. Just the fact that people are sharing it and enjoying it is the goal. It's hard to really predict the numbers, but it seems like that's happening so far. We're excited about it.

You don't have to worry about Jalopnik criticizing it, anyway.
Right! We'll leave that to other people. There are plenty of other critics out there, I'm sure. We'll have to go after them some other time.