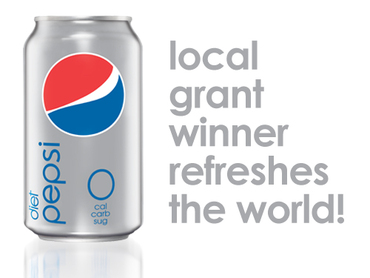 -- Patrick Nelson of Mankato Awarded $25,000 Grant to Give U.S. Military An Online Place to Share Their Experiences --

MANKATO, MN  – March 22, 2010 – The Pepsi Refresh Project, a groundbreaking effort that funds ideas that can refresh the world, announced today that Patrick Nelson of Mankato was awarded a $25,000 grant to develop and maintain a Web site “to give our brave Veteran's an online place to share their experiences.”  In 2010, Pepsi is awarding more than $20 million to ideas that will move the world forward. Anyone can submit an idea at www.RefreshEverything.com and each month the public decides who wins.

“There are a lot of great ideas and people doing good things for our community that don’t have funding available for it. The Pepsi Refresh Project gives them the opportunity to move these projects forward.” said Bonnie Barrer, Director of Sales and Marketing, Pepsi-Cola of Mankato.

Voters at www.refresheverything.com/woundedveteran agreed that Patrick Nelson’s idea is compelling. Nelson applied for the Pepsi grant to turn his self-funded Web site –  Real Combat Life – into a non-profit organization to help all past, present and future veterans of U.S. armed forces.  As a former soldier of numerous combat deployments, Nelson found writing as a way to help transition to the civilian world and help provide the public a first hand account of what life is really like in combat.  According to his grant submission, he said that all stories are not "battle" stories. They are stories about what military personnel do to pass the time and have fun, and the humanitarian missions that are too often neglected by media.

In an effort to support those who generate innovative, optimistic ideas, the Pepsi Refresh Project (http://www.refresheverything.com), will award more than $20 million in 2010 to move communities forward.  Individuals can apply for grants to benefit a variety of projects and site visitors can vote for the best ideas for funding.  The Pepsi Refresh Project is an evolution of the Refresh Everything initiative Pepsi launched in 2009, which showed the brand as an optimistic catalyst for idea creation, leading to an ever-refreshing world.   Pepsi will fund projects that make a difference in six categories: Health, Arts & Culture, Food & Shelter, The Planet, Neighborhoods and Education.

To implement the project, Pepsi has partnered with three organizations dedicated to making a positive difference in the world: GOOD, a leading platform for thought and action revolving around pushing the world forward; Global Giving, an online marketplace that connects people who have community and world-changing ideas with people who can support them; and Do Something, the largest non-profit teen charity.

Click on the link below to see Patrick’s television interview
http://keyc.tv/node/35223