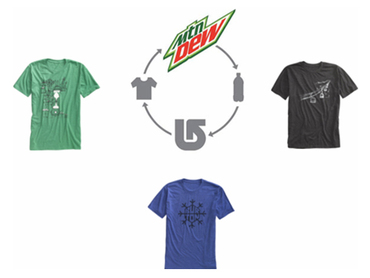 Burton Snowboards' Green Mountain Project (GMP) has partnered with PepsiCo in its launch of products with an eco-influence.

Mountain Dew has partnered with Burton Snowboards to launch a line of sustainable clothing and snowboarding gear made from post-consumer PET sourced from recycled bottles from Mountain Dew and other Pepsi soft drinks.

The line is part of Burton's Green Mountain Project (GMP), which features products with an eco-influence, and launched today with three hand-crafted t-shirts made from 50 percent recycled plastic bottles and 50 percent organic cotton.

The limited edition tees will be available exclusively at Burton flagship stores in the United States. A full line of clothing and outwear made from recycled PET will be unveiled in January when Burton introduces its 2013 collection, which will be in stores September 2012.

Mountain Dew's role in the GMP is the result of innovative thinking and more than a year's worth of research and hard work by a cross-functional team led by PepsiCo Sports.

Snowboarder Danny Davis, who rides for both DEW and Burton is the voice of the Green Mountain Project, and had this to say about the initiative, “For me, being a part of the Burton and Mountain Dew project is just a cool way to help the environment, and it’s good to see both companies working together to reduce and reuse some of their materials.”