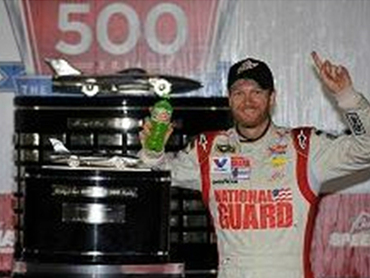 Mountain Dew spokesman Dale Earnhardt Jr. cruised to victory in the Daytona 500 NASCAR race on Feb. 23. The event, held in Daytona Beach, Fla., kicks off racing season, and DEW plans to keep the momentum going all season long with various DEW-themed paint outs of Dale Jr.'s No. 88 Chevrolet at the following races in:

Dale Jr. also fulfilled his promise that, if he won at Daytona, he would join Twitter. Out of the starting gate, @DaleJr already has more than 470,000 followers.

For more Dale Jr., check out the most recent Diet DEW commercial, which premiered during pre-game coverage of the Super Bowl.