Pitch Black For The Win! 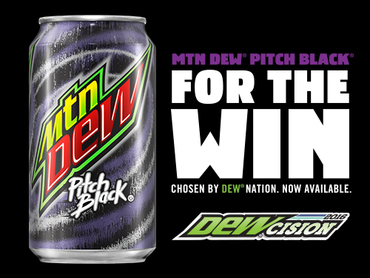 This summer Mountain Dew kicked off an epic competition for its die-hard fans. Dew fans had spent years asking for two flavors, Baja Blast and Pitch Black, to be sold permanently in stores. Mountain Dew was only going to bring one flavor back forever so it decided to let the fans vote in the DEWcision 2016 campaign... Overall the competition drew in nearly 5.8 million votes, with fans voting on Twitter using the hashtags #VotePitchBlack and #VoteBajaBlast. Pitch Black will permanently be available in stores beginning in September. (Adweek)